STADIUM Protocol aims to be the first port of call for players and team managers to exchange ideas and build relationships. STADIUM facilitates a standard measurement of player and team value that can be bought/sold/traded in a public market. At the same time, it offers tournament organisers the tools they need to manage leagues and other competitive opportunities.

By leveraging the liquidity within ParagonsDAO, we believe we can provide the best tournament and competitive structure for Parallel and other Web3 games.

BLVKHVND positions itself as the leading Web3 Esports DAO with a focus on players, branding, media, and continued development on and around the product & events at STADIUM.

ParagonsDAO aims to provide liquidity for metaverse assets and use on-chain player management tools to provide access to these assets at zero capital cost.

Together we are building a visual product that over time can compete with some of the biggest publicised esports brands, with an intended initial focus to provide for the rapidly growing Parallel ecosystem. 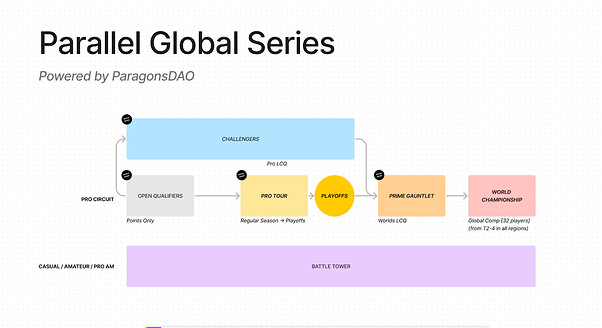 Everyone starts here. For the first year, we need to quickly identify the top crop of players where they will compete to qualify for the Pro Tour through a set of open qualifiers. After the initial Pros have been qualified, the Challengers Circuit continues in a series of last chance events awarding top players a chance to test their skills against the Pro Tour players in the Parallel Prime Gauntlet (last chance qualifier for worlds).

When you’re a pro, everyone wants your head. May your plays be prime. 8-10 (?) week live series of matches, culminating in the Paragon Playoffs. Only the best survive and make it to the world stage. The rest take a trip to the Prime Gauntlet to fight for a spot in Worlds and the invitation back to the Pro Tour next season.

So you didn’t make it in the Pro Tour, you clawed your way through Challengers and proved you’re one of the best unsung players. Well, your real test begins. Enter the disgruntled Pro players who aren’t giving up their seats so early. The most electrifying set of matches are the ones where nothing matters but the goal: GETTING TO WORLDS.

The best of the best from each region battle to see who is “Parallel Prime.” A massive 3 day event, the PGSC should be where fans from all around the world converge to learn about Parallel, engage with players, and watch the best players play on a World Stage.

Battle Tower is a modified competitive mode to suit casuals to pro players. Players are pooled in difficulty (eg, BT1 = casual am / BT2 = pro am) and climb to the top of the tower and earn staked rewards by other players and fans of parallel. Some towers, you have to challenge players in wager matches to up the stakes.

Support ParagonsDAO membership with STADIUM Protocol for access for players

→ 33.3% distributed at deployment of PGS

→ 33.3% distributed at implementation of ParagonsDAO membership into STADIUM platform

Define what a ParagonsDAO member is:
→ you have to hold xPDT

Define action on STADIUM:
→ you have to hold xPDT at time of minting STADIUM Player Card
→ you have to connect gamertag [PSN / Battle.net / Steam , etc.]

→ if you are a ParagonsDAO member, the player receives Paragons styled card assets: [icon, background, title]
→ becoming a STADIUM player entitles you to any available playtests from select web3 titles

Affiliate link for players from ParagonsDAO with Stadium incentive structure;

The Parallel Global Series will be the flagship event of ParagonsDAO. Being heavily involved in the assets and ecosystem, we consider it a great advantage to not only provide the assets but also create the best visual experience for the audience

BLVK Diamond Productions will be the core of the partnership, with the prospect that generating media and entertainment value will be another source of revenue for both our DAOs

Ownership of DAO will be 50/50 and held only by the DAOs’ respective treasuries. We will try to establish a community-based model after the end of the first league.

The Parallel Global Series will be the proof of this concept

Prizes will be funded from ongoing P2E rewards earned up to the event from WORLD. During this time, the Treasury Council will seek to use a percentage of our ongoing revenue from general play as a maximiser for the inaugural league

This incentive structure will allow BLVKHVND to acquire and own 1% of the PDT offer in addition to the funds provided in the seed round. Part of the offer is a continued incentive to bring STADIUM both assets and players through affiliate links.